So much conversation on heroin addiction, gambling addiction, sex addiction, and now internet addiction. These are important conversations. Most addictions start and end in pain….where ever that pain comes from. Gabor Mate says, pain stems from childhood. I believe that. The mind is a delicate sponge at birth. It doesn’t know how to sort yet. And that’s what we do in yoga, unsort…..its the process of reversing all we layered on, the unlearning of what we learned, disbelieving what we were told to believe and at the same time protecting the spaces that have always been sacred. Eventually those spaces grow, they evolve with resolve. Pain disappears, addictions rest.

But what about the lost addiction…the one not talked about anymore? Smoking…not marijuana, or hash but smoking tobacco. It may be tougher to quit smoking cigarettes compared to beating a heroin addiction. An Australian study found that  smokers have tried to quit 7.4 times but are still unable to do so. Sydney GP Raymond Seidler actually feels that people do not realize that quitting smoking is just as bad as kicking heroin out of your life.

“What smokers don’t realise is that nicotine addiction is as powerful, or even more powerful, than heroin addiction,” he said. ” The (brain’s) receptors for smoking are as strongly attached to nicotine as the heroine receptor is to opiates. That can come as a shock to a lot of people. Quitting is therefore a serious challenge for most.” said Dr Seidler.

I began smoking before I knew the hold it would eventually place on me. I was old enough to know that it was “for adults” and I wanted to be an adult. That would haunt me. each time I slip back into smoking, I instead feel like a child. It happened after many many years  just recently. Addicts have a trigger. Something triggers them to return to their old friend. What was mine? WHAT WAS IT? I can’t tell you how often I sat with that inquiry. Then it came to me….driving in inclement weather.

To know ourselves through Self study (Svadhaya) we can then work on what is behind the motivating factor (trigger) and the work really begins. And I did, and I am…and I always probably will.  Smoking is in the past as of this post. I learned that just because I had a near fatal accident in the past during heavy rains, it doesn’t mean it will happen again. We are in a universe of the Law of Attraction, and I can tell you that I can almost view my cigarette smoking as a notification that I am hitting redial, calling the Universe, asking for another car accident. 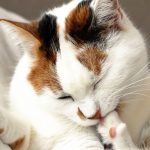