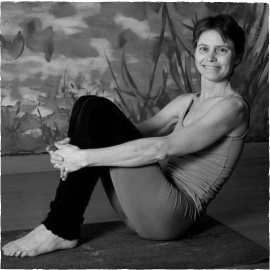 After living in New York City for two and a half decades, I moved to the Finger Lakes region in 2005 where I could be near my mother. In New York, I earned an M. Div from Union Theological Seminary and worked with the chronically homeless, who were often mentally ill and addicted.

I was first introduced to Yoga in 1998 during a period of intense personal transition and the practice has become a central aspect of my life ever since. After a couple of years of regular classes I began to take notice the power of the breath in my life off the mat – especially when confronted with the crisis situations so common in my work.

The ability to breathe, observe without judgment, and resist reacting impulsively served me well in volatile environments.When I relocated upstate I had the opportunity to surrender to my love of Yoga and earned my 200 hour Kripalu certification. With my Kripalu certification and trainings with Sarah Powers in Yin Yoga, my offerings reach deeply into the body, mind and heart.